Siri
Hall of Fame ProducerDilated Cardiomyopathy (DCM): NORMALPedigree“Siri” (Seer-y) was imported from Sweden to add fresh genes to the Centara Pedigrees. Siri finished her championship rather quickly and has been a wonderful contributor at Centara Standard Schnauzers. 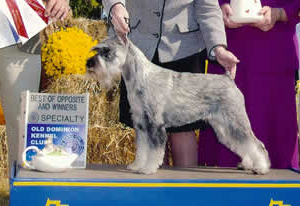 Siri represents breed type along with an excellent temperament. She passes those qualities along to her offspring.